Looking for an escape from the colder climates of Southern Australia and New Zealand as we head toward the winter months? Our Farmer's Tour to QLD is the answer!

Tour Leader, Kees van Haasteren, says that in previous years the majority of guests have been doing exactly that and in return, receive a reprieve to the warmth of sunny Queensland and the chance to explore the diversity of the state, from the wide-open plains in the west, to the tropics up north and the Great Barrier Reef.

Queensland offers a huge variation in both landscape and agricultural industries and Kees describes the major highlight of this tour as being ‘the wide variety of enterprises visited, which are normally closed to general tourists, including cattle breeding and backgrounding, finishing cattle, feedlotting, livestock saleyards, broad acre farming, irrigation, horticulture and dairy.”

As well as various farm visits and agricultural highlights, the tour offers 2 nights within the spectacular Carnarvon Gorge National Park. Buried deep in the state’s Central Highlands, the park is characterised by sandstone cliffs that majestically change colour with the sun, remnant rainforest, pools, caves and indigenous art galleries. 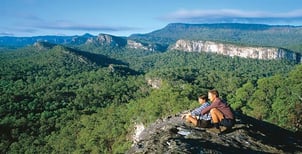 Little known outside the state, this huge chunk of wilderness, encompassing the Carnarvon Gorge, has been preserved since 1932 but its beauty lies not just in its appearance but its purpose, with the gorge providing a much-needed supply of water to an otherwise hot and dry area of the state. It is a lush oasis in the midst of an otherwise relatively harsh environment.

Not far from Carnarvon National Park is the historic outback town of Roma. Just as the Great Barrier Reef is known for its marine life, Roma is on the map for its cattle, more specifically its twice weekly auctions at the Roma Saleyards. 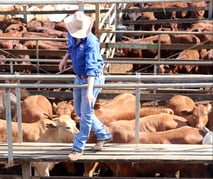 It’s the largest livestock selling centre in the southern hemisphere, with over 400 thousand cattle sold there every year. The tour coincides with auction day and it’s an incredible spectacle to witness.

Further north, the tour stops in at the town of Longreach, which has earned itself the title of being the heart of the Queensland outback. It’s home to the Qantas Founders Museum, a fascinating display of memorabilia covering the airline’s history, as well as a full-scale replica of the first ever Qantas aircraft.

Then there’s the spectacular Stockman’s Hall of Fame, a tribute to the men and women of Outback Australia. Telling the story of rural Australia, from 40 thousand years ago to present day, the centre features a daily show with a real-life stockman and his animals.

From here, there’s a number of highlights and farm visits all the way through to the northern tropical city of Cairns, where visitors have the option of spending the day on the Great Barrier Reef or in the Daintree Rainforest.

If you have a broad interest in livestock and agricultural enterprises, a keen sense of adventure and a longing for an experience of outback Australia as well as a winter escape to the tropics, this could well be the perfect tour for you.