A ‘best of’ tour in a country like South Africa is almost an oxymoron. This is a land renowned for offering some of the most memorable tourist experiences on the planet, with a wealth of wildlife, jaw-dropping scenery and a rich tapestry of culture.

South Africa has 11 official languages and is regarded as one of the most diverse cultures in the world, giving rise to the term ‘rainbow nation’.

Quadrant Director, Colin Beckett, has managed agricultural travel programs around the world, and while he admits Australia will always be home, he’s now living on a maize and cattle farm in Kroonstadt, in the north of South Africa, and has worked extensively on perfecting the itinerary Quadrant offers on this Best of South Africa tour.

He says the biggest point of difference between Quadrant and other tour companies is that it’s “people to people”. One of the key focuses for Quadrant is on ensuring guests are able to engage with the local community and really get a sense of the culture and way of life of their chosen destination and the program for South Africa is no exception.

As well as several farm visits and the chance to dine and debrief with locals, one of this tour’s main highlights is the

,000 farmers in attendance. One of the most fascinating aspects of the tour, according to Colin, is that there are many similarities to farming practices in Australia and that even the hospitality and easy-going nature of the farmers mirrors that of back home.

But no trip to this continent is complete without the three words that every tourist hopes to tick off their travel list: THE BIG FIVE!

Madikwe Game Reserve is 75,000 hectares of bushland, near the border with Botswana, boasting all of the majestic big five animals: lions, rhinos, buffalo, elephants and leopards. A two night stay ensures guests have ample opportunity to spot them all.

Madikwe is South Africa’s fourth largest game reserve and as well as The Big Five, it’s home to cheetah, brown hyena and the elusive Aardwolf, a rare wolf-like creature that is a member of the hyena family, as well as over 300 migrant bird species.

Like all the carefully selected accommodation, Tau Game Lodge at Madikwe is a tourist attraction in its own right, and an intimate one at that, designed in harmony with the natural surroundings. With just 30 luxury chalets spread out in a U-formation on either side of the lodge, all guests have expansive views over the nearby waterhole, which attracts a vast variety of game.

From Madikwe, guests spend over a week travelling through the heart of the country with visits to the Mega Marino Stud, a dairy farm, an elephant sanctuary and a host of other highlights en-route to the final destination of Cape Town. 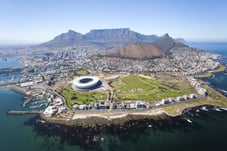 Crowned by the magnificent Table Mountain National Park, Cape Town’s natural landscape makes it one of the most beautiful cities in the world. If weather permits, guests ascend Table Mountain to be afforded one of the most spectacular views on the planet, followed by a visit to the Cape of Good Hope Nature Reserve to see where the Indian and Atlantic Oceans meet and a stop at Boulders Beach to say g’day to the resident penguin colony.

From here it’s farewell to the regular tour and what will surely be a holiday to remember forever, but those that continue on for the extension tour to Victoria Falls and Chobe will be rewarded with one of Mother Nature’s most impressive creations. There is something almost other-worldly about the majesty and power of Victoria Falls, the world’s largest stretch of falling water, straddling the border between Zambia and Zimbabwe.

Scottish explorer David Livingstone, the first European to discover the falls, described it as the most wonderful sight in all of Africa, with “scenes so lovely, they must have been gazed upon by angels in their flight”.